About the Diss Mercury

Its sister paper was runner up a year later and in 1993 the Wymondham paper was at it again, scooping the regional free paper of the year award.

In the community the papers have made their mark too with the Mercury Lifeline Appeal raising more than £12,000 for local old people in 1990.The Diss Mercury is delivered free to more than 15,300 households every week in Diss, Harleston, Long Stratton and several villages nearby.

The Wymondham and Attleborough goes out to more than 16,000 homes and covers both towns as well as Hingham, Old and New Buckenham, Mulbarton and many other villages.

A selection of our magazine titles can be found below. Click the magazines to find out more. 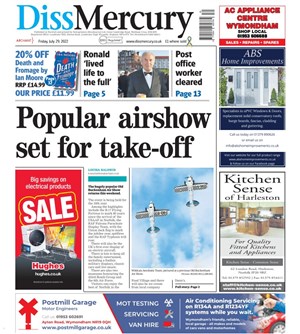 Click here to view
the Great Days Out
supplement